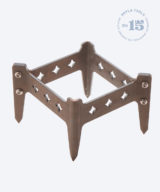 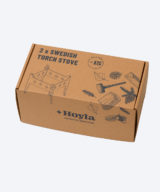 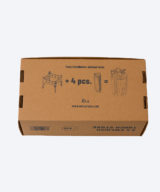 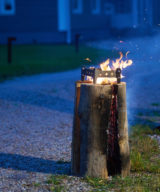 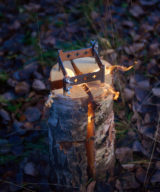 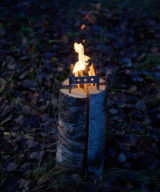 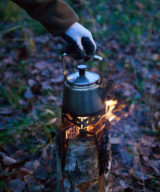 Durable, easy-to-use and above all functional iron stove for making Swedish torches or campfires. If you’re interested in making everyday things a little bit easier, you’ve come to the right place.

Let’s be real – is there anything worse than shivering in the freezing cold, waiting for the fire to get going? Of course, but the situation mentioned above is not fun either. Instead of a traditional campfire we’d suggest you try a Swedish torch, easily lighted and assembled even by a beginner with the help of this magnificent Hoyla Tools iron stove.

How it works is quite simple, really. All you need is this iron stove, four logs, a lighter and any hand-held whacking tool, such as a hammer, a rock, a camping ax or another log.

Place the logs in a vertical position, just like in a Swedish torch, and strike the stove to the logs. The stove connect the logs firmly together and keeps them upright. To help with ignition you can use a piece of bark, for example, but usually dry logs burst into flames easily like they were dipped in gasoline. In a Swedish torch, the logs burn in a vertical position so they ignite better than a traditional campfire. And we’re done!

In addition to the Swedish torches illuminating your yard, the stove is perfect for cooking, for example making coffee or grilling sausages or marshmallows.

The stove is currently available as a yard model made out of stylish black iron, containing two stoves so you can conjure up two very handsome Swedish torches.

Later on we will also have a camping model made out of stainless steel, containing one stove for one Swedish torch, a protective bag and two sausage holders bent from metal wire that can be attached to (almost) any piece of wood to help with your cooking efforts. Bon appétit!

The camping model is unbeatable while you’re on your adventure, as you no longer have to carry a large pile of firewood – since you only need four logs – or worry whether the campfire sites have all the equipment you need to start a fire. Additionally, the camping model is easy to carry, and the protective bag makes sure the used stove doesn’t stain the other stuff you’re carrying in your backpack.